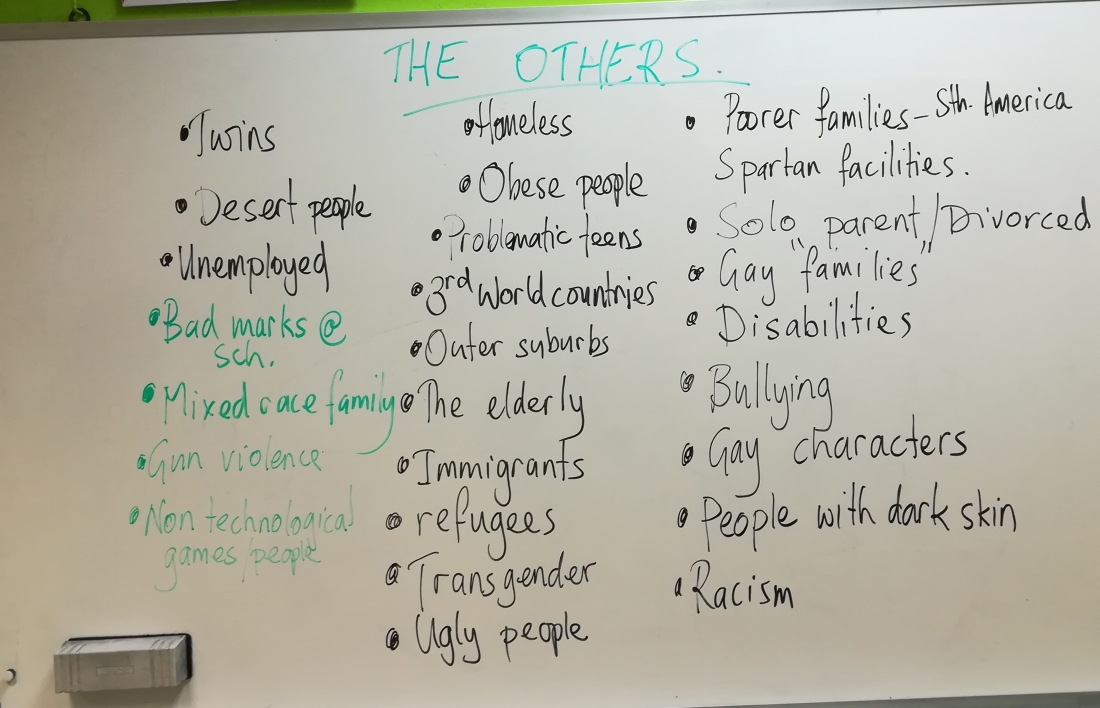 The Whiteboad- Stage 4 in Natasha Lambert’s “The Others” lesson

The following are samples of materials produced by the learners in Natasha’s lesson.

Level: B1 and above 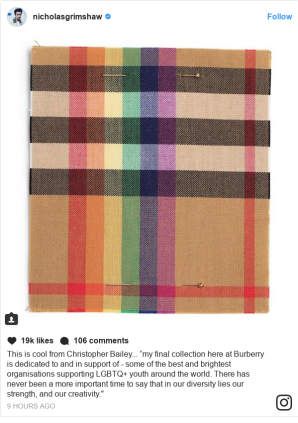 Christopher Bailey dedicates his last Burberry collection to gay rights. Burberry has announced it’s dedicating its next collection to the celebration of LGBTQ communities.The fashion house has unveiled what it’s calling #therainbowcheck – a twist on its signature pattern. Three charities, which work with LGBTQ communities around the world, will also be supported by the brand. Burberry’s autumn/winter 2018 collection will be unveiled on Saturday at its London Fashion Week show. The rainbow check is a twist on Burberry’s famous print.

In a statement on their website, the fashion house said: “Burberry is supporting three LGBTQ+ charities dedicated to broadening support for this community around the world. “The rainbow, a symbol of inclusiveness and joy, is celebrated throughout the February collection.” It also shared a photograph of its signature print, which has rainbow colours through it. The rainbow flag is a symbol of the LGBT movement.

The Albert Kennedy Trust is being helped by the fashion house. It works to support young homeless LGBT people in the UK. It says it’s overjoyed to be receiving a generous donation from the brand – saying it will make a big difference to them. “This announcement gives voice to a large and influential community about the importance of raising awareness of LGBT youth homelessness,” it added. The International, Lesbian, Gay, Bisexual, Trans and Intersex Association is also being helped by Burberry. The third charity receiving funding is The Trevor Project – a US organisation that works to prevent suicide among the LGBT community and young people questioning their sexuality.

Burberry’s chief creative officer Christopher Bailey is leaving after 17 years. This weekend’s show will also be the last collection from Burberry’s chief creative officer Christopher Bailey. It was announced in October he would leave the fashion firm after 17 years. He says: “My final collection here at Burberry is dedicated to – and in support of – some of the best and brightest organisations supporting LGBTQ+ youth around the world. “There has never been a more important time to say that in our diversity lies our strength, and our creativity.”

The announcement has had a positive reaction online, with people using the hashtag #therainbowcheck.

A reading and vocabulary lesson

THIS IS NOT A SAD STORY

Like any middle schooler, I usually start my day with cereal. Every morning, after brushing my teeth, I have a bowl of Cinnamon Toast Crunch with milk, and try to catch all the flakes with my spoon before they go soggy. I get dressed for the day, and try to put on some makeup before my mom yells at me for hogging the bathroom. Then I go catch the bus.While in most other ways I’m just your typical eighth grader, I also happen to have been born with Charcot-Marie-Tooth, a form of muscular dystrophy. Charcot-Marie-Tooth is a degenerative nerve disease that causes muscles in my arms and legs to atrophy over time. I wear leg braces and use a wheelchair to get around, and have an aide at school who helps me spin my locker combination. Every morning, an accessible bus arrives at my house to pick me up. Actually, it’s more of a van, with a “School Bus” sign on top.For the most part, despite my wheelchair and knowledge of medical terminology (you build that kind of vocabulary when it’s about your own limbs), my daily reality is mostly the same as that of my classmates. I groan over the same math and science homework, giggle with the same friends, and like every other adolescent, I probably spend too much time on my phone. As a girl with a disability, I know that my story is not a sad one.For the past four years, I’ve been trying to convince everyone else as well that my story doesn’t have to be a sad one. In 2013, I started a Change.org petition asking American Girl, my favorite doll company, to make a doll with a disability. As a longtime fan of the company, whose dolls are accompanied by books and movies with positive stories of girls overcoming challenges, I wanted to see a story with a heroine who was in a wheelchair like me. The petition got 140,000 signatures, and got a lot of news coverage. People clearly wanted to see kids with disabilities featured in an upbeat ways.It would not be fair to say that American Girl completely ignores disability. They do make accessories for dolls like a wheelchair, crutches, a hearing aid and a diabetes care kit. In one of the stories there is a secondary character in a wheelchair; in another, a boy in the hospital with polio, and the 2017 Girl of the Year has a stutter. But these were not the characters I wanted to see.I was inspired to take matters into my own hands and write a book of my own, starring a girl with a disability. I knew exactly what genre of book I wanted to write. I’ve never been a fan of “great children’s literature” that was somber or tragic. My friends and I have loved the Cupcake Diaries series, paperbacks with pink covers that described four best friends and their adventures together, making cupcakes. Not exactly heavy stuff, but fun to read. I wanted to write something like the Cupcake Diaries, but starring a middle-school girl with a disability and her filmmaking adventures with her best friends. Instead of making cupcakes, they would make special-effect YouTube videos.My older sister Eva helped me set up a Kickstarter campaign to hire an editor. We wrote the first draft of the book, called “Mia Lee Is Wheeling Through Middle School,” and found a literary agent. Using our money from our Kickstarter campaign, we hired someone to help us edit our draft into a polished copy, then sent it out to publishing houses.When the responses started to come in, they were almost all the same: for a girl who was in a wheelchair with a degenerative nerve disease, Mia Lee was just too happy.“I keep expecting more from the plotline than what’s currently here,” one publisher wrote. “What if it was about sisters who were twins, and one had Charcot-Marie-Tooth and one didn’t? That would create a more important conflict.” Another said that Mia Lee’s character didn’t seem suited for a lighthearted story. Finally, my agent told me, “I just don’t think people are ready for this type of story for this type of character.”

Is the underlined part important for the story ? If yes , why?

Is her illnesses curable ?

4) Find these words in the text and come up with a definition. See example below